When Little Rock in 1957-58 found itself paralyzed by deep seated segregationist attitudes and shuttered public high schools, the Women’s Emergency Committee (WEC) organized and enlisted hundreds of women to campaign for the reopening of the high schools in the Fall of 1959. Jean Gordon was an energetic member of the WEC as well as the Council on Human Relations (CHR), a bi-racial community group working to break the divisive color line between whites and blacks. During these years, the CHR combined forces with local black leaders to end the Jim Crow era of segregated downtown Little Rock lunch counters, retail stores and public theaters.

Jean’s tireless work for equal public education propelled her to the presidency of the Little Rock Council of the PTA, and for the first time white and black PTAs were integrated. Jean’s reputation for leadership pushed her further into the crucible of change with her election to the LR School Board in 1965. Negotiating amid the clash of local politics over the pace of desegregation proved invaluable to Jean’s later encounters with Congressmen and national leaders in the cause of nuclear disarmament and a reformed military budget.

1982 witnessed the founding of Peace Links by Betty Bumpers and other congressional wives. Their idea was that American women could form lasting relationships with women in the Soviet Union to promote peace instead of war. Peace Links needed women leaders from everywhere, and Jean Gordon was among the first to enroll. Jean ultimately served as Chairperson of Arkansas Peace Links and organized and led a delegation of Arkansas women to the Soviet Union. Locally Jean Gordon was chairperson of the Arkansas Peace Center.

The military build-up and threat of nuclear confrontation in the 1980s spurred progressive women again to organize. Women’s Action for Nuclear Disarmament (WAND) lobbied congress to curtail the nuclear arms race. With the close of the Cold War in the early 1990s, WAND (now Women’s Action for New Directions) adopted a broader mission of promoting world peace and security and a federal budget that redirects excessive military spending toward human and environmental needs.

Our own Arkansas WAND chapter was formed in 1997. After both the Arkansas Peace Center and Peace Links of Arkansas had folded, Jean Gordon invited women working with non-profits who needed federal funds to a luncheon to interest them in starting a WAND chapter here in Central Arkansas. Over 50 women showed up. She showed them how the federal budget pie is sliced – with the military getting over 52% of the discretionary budget.

They decided to organize around a local issue – the planned incineration of chemical weapons in Pine Bluff.   They had heard about problems with incineration in Utah and that there were newer and safer methods of disposing of the weapons.   After they held a demonstration there, the Army personnel were not too happy with these ladies from Little Rock, but did invite them to a presentation to convince them it was safe. The Pine Bluff Arsenal proceeded with the incineration, but WAND became part of a lawsuit questioning their methods.

Arkansas WAND’s de facto home is Jean Gordon’s house. She hosts monthly potlucks for WAND members. She lived at this same address when she was elected to the school board in the 1960s. Her living room was the place where ACORN was founded and where Presidential candidates and Nobel Peace Prize winners have visited – all in the cause of peace and justice. 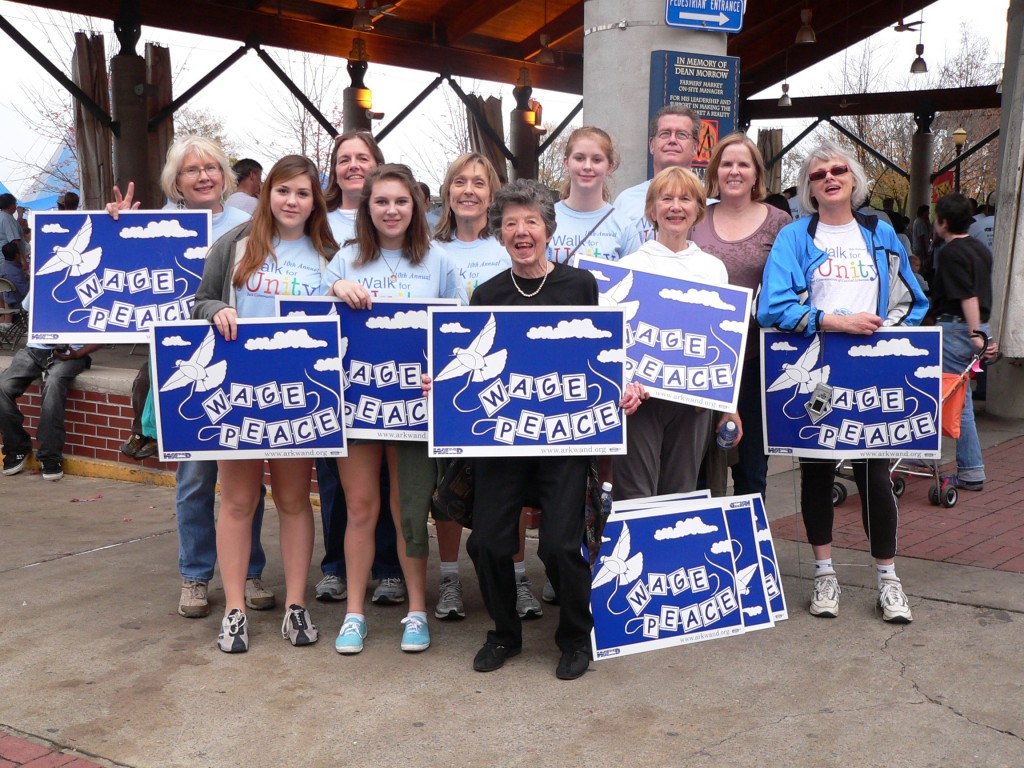 In the fall of 2011, Abigail Disney was the featured speaker for the Women’s Foundation of Arkansas luncheon. Arkansas WAND members and some students from the Clinton School of Public Service attended a screening of her film Pray the Devil Back to Hell. This film told the story of Liberian women from the Christian and Muslims congregations in Monrovia, who formed a coalition with the purpose of ending the years of civil wars that had devastated the country. We were incredibly moved and inspired by the main force behind this women led peace movement Leymah Gbowee. We also learned that Ms. Disney was producing a PBS series Women, War, and Peace. One of the episodes was Pray the Devil Back to Hell. This screened in the fall, but was quite limited in Arkansas.

Clinton School student Trish Flanagan met with members of Arkansas WAND to discuss the possibilities of setting up a screening of the film with facilitated discussion led by students. The Amnesty International chapter at Pulaski Academy High School was developing a film series for the spring and joined the effort to bring this film to a larger audience. The film was shown to over 50 people of all ages. The entire event was planned, publicized and carried out by the students.

Again inspired, we talked of the possibility of inviting Leymah Gbowee to Little Rock to speak at the Clinton School for Public Service. In December 2011 she was awarded the Nobel Peace Prize along with Ellen Johnson Sirleaf and Tawakkul.

Arkansas WAND extended an invitation to speak at the Clinton School Public speakers series to Ms. Gbowee, she accepted and it was an inspiring visit that facilitated our own mighty powers in Arkansas. A young Liberian woman graduated from the Clinton School for Public Service in May, 2016.

Watch the trailer for Pray the Devil Back to Hell here.

Read about Leymah Gbowee’s biography “Mighty Be Our Powers” on her website.